For San Francisco Airport (SFO) flight delays or cancellations, you may have the right to compensation under EU Regulation 261/2004. You may claim up to 600€ (approx. $700) from the airline you’re flying with.

Flight delays or cancellations happen, but that doesn’t mean you should accept them.

Under EU law you are protected and can ask for reimbursement for your flight.

You are eligible for compensation for flights departed from the EU airport but arrived at San Francisco (SFO) Airport. And, you can even claim for EU-regulated airlines’ flight departed from SFO airport and arrived at EU airport.

Here’s the quick guide to understand in detail when you can claim delayed flight compensation.

Under EU law, if your flight has been delayed, canceled or overbooked, you could be entitled to €600 (approx. $700) in compensation.

You could be eligible for San Francisco Airport delays compensation if …

How much can I claim for San Francisco Airport flight delays?

Your rights under EU law

Under EU law EC 261 Regulation, air passengers are entitled to compensation or refund from the airlines, if the airline was responsible for…

Airlines may excuse if the reason behind disruption was ‘extraordinary circumstances’, which is beyond their control, thus no compensation in such cases.

Examples of such circumstances include San Francisco Airport weather delays due to fog or wind, any technical problem with airplanes, or airport strikes.

For longer flight delays you could be entitled to compensation or refund under EC Regulation 261/2004.

If your flight departed from the EU airport, and delayed on arrivals for more than 3 hours, you could be entitled to compensation.

Note: It should be a flight to EU airport with an EU-regulated airline or flight from EU airport to SFO airport.

San Francisco International Airport (IATA: SFO) is the largest airport in the Bay Area. It serves flights throughout North America and is a major gateway to Europe and Asia.

San Francisco Airport is the largest hub for United Airlines and a secondary hub for Alaska Airlines. 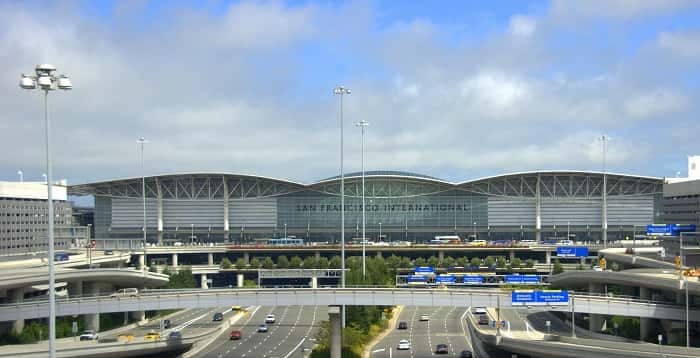 San Francisco Airport consists of 4 terminals (1, 2, 3, International) and seven concourses (labelled A to G ) with a total of 115 gates arranged in a ring formation.

Terminal 1 known as the “South Terminal” handles inbound and outbound domestic flights within the US.

Terminal 2 is also known as “Central Terminal” handles inbound and outbound domestic flights within the US especially the ones operated by American Airlines and Virgin America.

Terminal 3 was formerly known as the “North Terminal” operates outbound and inbound flights only by United Airlines to several cities within the US.

How to Get to San Francisco Airport?

There are plenty of ways to reach San Francisco Airport, passengers can use any of the following ground transportation facilities available near the airport.

BART station is located in the Parking Garage of the International Terminal G and is the only direct rail link between the airport, the city of San Francisco, and the general Bay Area.

SamTrans operates regular bus services between the airport and the city, San Mateo County, the Peninsula, and Palo Alto.

Taxis can depart from designated taxi zones at the roadway center islands. Passengers can avail of car rental services.

Caltrain is a free shuttle and from San Francisco Airport it is possible to connect to Caltrain services.

Skytrax rates airlines and airports based on the quality, services, and performances. San Francisco Airport has 4 stars out of 10 based on 157 reviews as of 10th january 2022. Passengers usually complain about poor customer services, terminal cleanliness, uncomfortable seats, queuing times and more.