If your Newark Airport flight was delayed or canceled, you may have the right to compensation under European Regulation EC 261/2004. The compensation amount is up to 600€ ($700).

Newark Airport (IATA: EWR) is one of the busiest airports, thus flight delays or cancellations are a very common thing here.

As an air passenger, you must be aware of your rights. You are protected under EU law for EWR delays or cancellations. In such cases, you may be entitled to delayed flight compensation, re-routing and in certain cases, refund too.

You may be eligible for compensation if ……

How much can I claim for Newark Airport flight delays?

Your rights to compensation under EU law

Under EU law, in these cases, you could receive compensation, if the airline was responsible for …

Whereas, if the disruptions were caused due to some extraordinary circumstances, there is no compensation.

Examples of such circumstances include bad weather conditions, natural disasters like storm, tsunami, etc., air traffic control suspends or restrict, or any technical problem with airplanes

Under EU law EC 261 of 2004, for longer flight delays you could be entitled to compensation or refund based upon the length of the delay and travel distance.

There’s no compensation if the disruption was caused due to extraordinary circumstances, or the situation was beyond the control of the airline.

Whereas, if the delay is caused due to general airport conditions, and there is news of other airlines in operation, you could claim.

For flight delays of more than three hours on arrivals, you could be entitled to compensation under EC Regulation 261/2004.

You booked an EU-airline flight and it gets canceled at Newark Airport without prior notice of 0 to 14 days, you may ask for flight cancellation compensation or a refund.

Does the EU 261 rule applicable to Newark Airport flights?

Newark Liberty International Airport (IATA Code: EWR) is one of the busiest airports in New Jersey, USA. It is jointly owned by the cities of Elizabeth and Newark.

It is amongst the three main airports serving the New York metropolitan area after John F. Kennedy International Airport and LaGuardia Airport. These three airports are operated by the Port Authority of New York and New Jersey.

It supports 50 air carriers and it is United Airlines’ third-largest hub.

It’s the 43rd busiest airport in the world by passenger traffic. And in 2019, the total passengers’ traffic was around 46 million passengers. 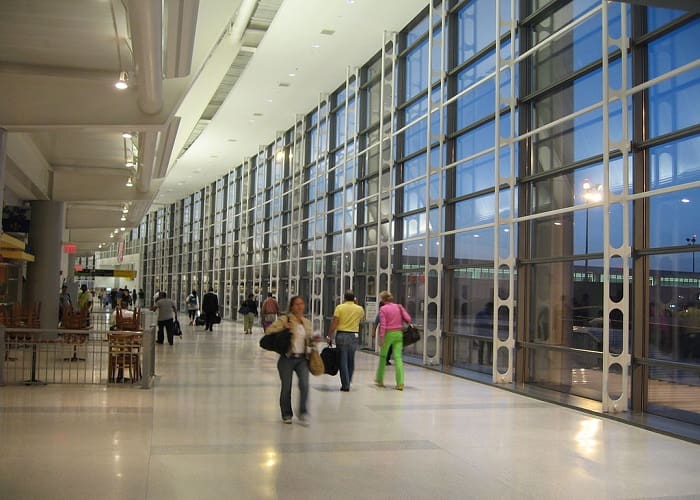 Newark Liberty Airport has three terminals: Terminal A, Terminal B, and Terminal C.

Terminal A was completed in the year 1973 and it has a total of four floors. On the top floor, there are ticket counters. Gates and shops are on the third floor. On the 2nd floor, there are baggage carousels and parking is on the 1st floor.

This terminal also has four levels, same as Terminal A. Gates and shops are on the 3rd floor. The ticket counters are on the top floor, but for Aer Lingus, Virgin Atlantic, Delta Air Lines, and Icelandair you will find the ticket counters on the second floor. And first-floor for British Airways, Level, and Spirit Airlines.

Terminal C was completed in 1988 and it has two ticketing levels. One for domestic check-in and another for international.

You will find the gates, food, and shopping outlets located on a mezzanine level between the two check-in floors. It can handle wide-body aircraft and narrow-body aircraft through its multiple gates.

This terminal is typically for United Airlines and its regional carrier United Express.

How to Get to Newark Liberty International Airport?

To reach Newark Airport, passengers can use any of the following ground transportation facilities available near the airport.

You will get the benefit of a free monorail system i.e AirTrain which connects the airport terminals with all stations along New Jersey Transit’s Northeast Corridor Line & North Jersey Coast Line. This facility also helps passengers to connect to the parking lots, parking garages, and rental car facilities.

You will get the benefit of a free monorail system i.e AirTrain which connects the airport terminals with all stations along New Jersey Transit’s Northeast Corridor Line & North Jersey Coast Line. This facility also helps passengers to connect to the parking lots, parking garages, and rental car facilities.

There are also Parking lot (short & long term) facilities with the shuttle buses and monorail for easy access to the terminals.

A new free Cellphone-lot waiting area facility is also available for cab drivers or people who came to pick or drop someone.

Skytrax rates airlines and airports based on the quality, services, and performances. Newark Airport has 2 stars out of 10 based on its 335 reviews. Newark Airport passengers usually complain about poor customer services, terminal cleanliness, uncomfortable seats, baggage or luggage check-in delays and more.

Are there any flight delays at Newark Airport?

Due to heavy passengers’ traffic, cargo load or busy airport terminals, it can happen that flights get delayed or canceled. For Newark Airport delays or cancellations, you can claim compensation up to 600€ from airlines, as per EC Regulation 261/2004.