If your Air Nostrum flight was delayed or canceled, you may have the right to compensation under European Regulation EC 261.The amount of compensation is up to 600€ ($700).

Here is all you need to know to claim compensation of up to 600€ per passenger under EU 261 rule for Air Nostrum flight delays or cancellations.

You may be eligible for flight delay compensation if …

How much can you claim for flight delays?

Under EC Regulation 261/2004, air passengers are entitled to compensation or refund from the airlines for longer flight delays, cancellations and denied boarding due to overbooking.

In these cases, you can claim compensation, if the airline was responsible for …

Whereas, if the flight disruptions were caused due to some extraordinary circumstances there is no compensation.

Examples of such circumstances include security threats, strike, tsunami, extreme bad weather conditions, or any ‘Act of God’.

To read more about your right to reimbursement, continue reading at EC261 – EU air passenger rights.

You are eligible for plane delay compensation if …

✔your flight had 3+ hours delay at the arrival airport, i.e., at the final destination

If your flight was canceled without prior notice of at least 14 days, you may ask for flight cancellation compensation or get a refund.

There are two options available for you to choose from …

If your alternate or replacement flight gets delayed beyond the scheduled arrival time, you are entitled to canceled flight compensation.

If you were denied boarding, you may be eligible for compensation under the European Regulation EC261 up to 600€ if …

If you were denied to board the flight due to overbooking, you should be re-routed to the earliest available flight.

Alternatively, you can ask for a refund of the ticket cost (which should be credited in the next 7 working days), if you are not willing to travel.

If you had been stranded at the airport for your replacement flight, it’s your right to ask for free:

You may be eligible for missed flight compensation up to 600€ under the European Union Regulation EC261, if …

Am I eligible to claim compensation?

EC Regulation 261/2004 is a European law, it applies to EU airspace. You do not have to be an EU citizen to claim delayed flight compensation.

Thus you are eligible for compensation under EC 261 Regulation.

Passengers are often unaware of their rights and end up claiming a futile amount compared to what they are entitled to receive.

At “Claim Flights” we facilitate free flight delay compensation calculator. It helps you to calculate the amount that you can demand from the airline.

You can check for free the amount Air Nostrum owes you.

How to proceed with your claim?

How to claim compensation for Air Nostrum delays?

In general, when passengers approach the airline, they were excused with reasons such as ‘extraordinary circumstances’, thus no compensation.

But, we know the actual reason behind the flight disruptions and help you with your claim.

To proceed with your claim, check your flight in our compensation checker tool.

All you have to do is provide us with your flight number, date of journey, and some further information.

If you further decide to claim through us, provide us with your personal details and assign us by signing the digital contract.

We work on a “No Win = No Fee” basis. You don’t need to pay anything if we are not successful. You will not have financial risk. You pay only if we get money.

Our claim experts will work with various other teams to collect data so that everything goes smoothly.

Our claim experts have access to flight information such as the time by which the flight was delayed, the reason behind it, flight departure and arrival time, etc. making us more likely to win the compensation.

Don’t be late, claim for your rights today

Air Nostrum, also known as Iberia Regional and Líneas Aéreas del Mediterraneo, was founded in 1994 in Valencia, Spain. The airline launched its maiden voyage on the 15th of December, 1994, from Valencia to Bilboa. Air Nostrum is an independent carrier as an Iberia and Binter franchisee. Air Nostrum is also a member of the Oneworld airline alliance.It currently has more than 2000 employees with annual revenue of €500 million. The airline has three main owners: Air Nostrum management, Caja Duero, and Nefinsa. Nefinsa owns the majority 74.8%, Caja Duero owns 22.2% and the remaining 3% belongs to Air Nostrum Management.

Air Nostrum has a fleet of 39 aircrafts and travels to 58 destinations. Flights are offered to 51 international destinations and 91 domestic locations. Chartered flights are also offered. The airline executes 200 flights each day, between 60 different airports located in Europe and North Africa. 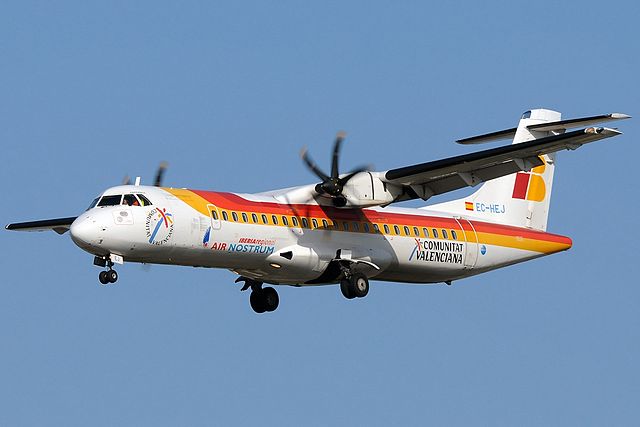 Source: Wikimedia Commons
Madrid is the main market for this airline focusing on connections along domestic and international routes. Valencia Airport sits at the main hubs, with major connections at Madrid-Barajas Airport and also Barcelona Airport.

Due to Air Nostrum’s exceptional service it has received a number of awards over the years. Six times (five gold and one bronze) it has won Airline of the Year from European Regions Airline Associations. Palme d’Or for Sustained Excellence was also award to the airline for high business performance and sustained excellence. Air Nostrum was the first airline to ever receive this award.

Air Nostrum has an exceptional reputation for being on time. The airline has been on schedule 90% while no flights were cancelled and there were no flight diversions.

As stated in the passenger regulation 261/2004, which Air Nostrum follows, customers that have been delayed for more than 3 hours are entitled to compensation, likewise if your flight has been cancelled without notice. Overbooking leading to customers being denied boarding is also ground for compensation.

Passengers can claim a maximum of £450 for flights meeting these requirements. Call the airline directly to seek compensation. You may speak to Claim Flights as they focus on helping customers receive compensation when entitled. You will need to provide flights details and basic information when calling about your claim.

Department of Transportation also known as DOT has set certain air-travel rights for people who are travelling from US to EU. If you are bumped due to overbooking, delayed for 3 hours or went through flight cancelation, you have right to claim for compensation. You can use our online calculator to check how much amount you can claim for.